Visits
Please contact either the builiding owner or the architect
Related publications
Turris Babel no. 106 - 07/2017, page 108: "Rainhof, Gsies"; http://atlas.arch.bz.it/de/rainhofbz/ The retrofitted building was eventually designated “heritage building of the month” by the heritage office: http://www.provinz.bz.it/kunst-kultur/denkmalpfle 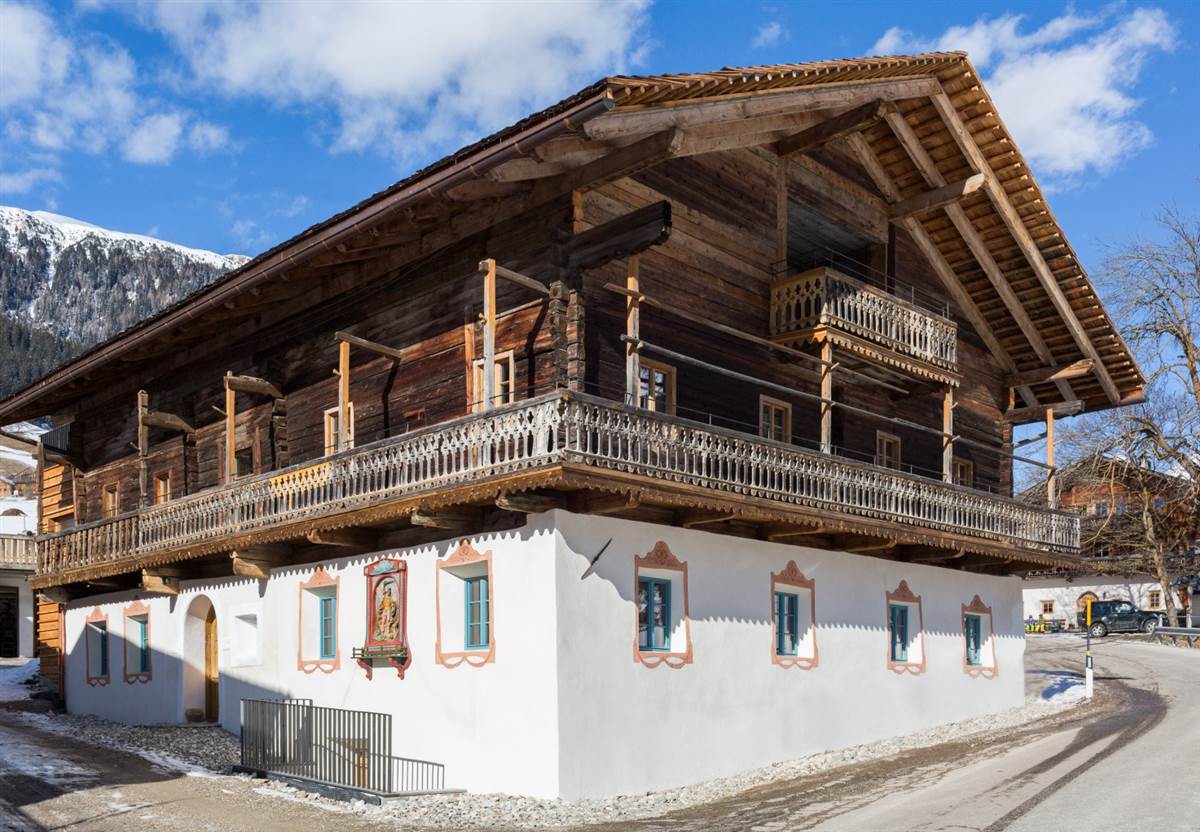 The Rainhof is one of the most precious rural buildings of the Gsiesertal valley, at 1.500 m above sea level. Built with solid stone masonry walls and the vernacular “Blockbau” (solid wood) construction, the building presents many traditional features, such as windows with deep reveals, decorated painted frames around the windows, and vaulted ceilings. The project was awarded the 1st prize at the Bauern(h)auszeichnung - ITAS-Preis 2016 for the best renovation of a farmhouse in Südtirol.
GENERAL INFORMATION RENOVATION PROCESS RETROFIT SOLUTIONS EVALUATION
Energy performance
60 kWh/m2.y

The Rainhof is a listed rural building located at the end of the Gsiesertal valley, at 1,500 m above sea level. It is one of the most precious rural buildings of the area and it is placed just off the main road in a prominent position. The ground floor was built with solid stone masonry walls, whereas first and top floor were built with the vernacular “Blockbau” (solid wood) construction technique. The building presents many traditional features, such as windows with deep reveals, decorative painted frames around the windows, and a vaulted ceiling at the entrance. The building was designed and used following the layout of the “Paarhof”, a traditional design of rural agricultural dwellings in South Tyrol where the dwelling and the farm building stand independently. The main building was designed to accommodate three generations, the ground floor was used as living room and kitchen on one side and workshop and pantry on the other side. The entrance/corridor was used for animal slaughtering, whereas the rooms upstairs were dedicated to the bedrooms for the family and farm workers.

ELEMENTS WORTHY OF PRESERVATION
The external appearance of the three main facades are worth of preservation. The ground floor was built in natural stone masonry and still conserved a traditional lime plaster. The window and door openings in the ground floor have deep reveals and are profusely decorated around. The wooden structure of first and top floor built in traditional log construction (“Blockbau”) and the woodwork filigree of the balcony is to be maintained. It was especially important preserving the "Labe" (entrance area) with its barrel vaulting and the "Stube" (heated living room) with wooden cladding and valuable wooden ceiling divided into sections ("Felderdecke") from 1901. Lastly, it was important to preserve the materiality and appearance of the wooden shingle roof.
Heritage Value Assesment
The proposed project was developed in consultation and strong collaboration with the heritage office of the province of Bolzano. The project was the result of a series of meetings and discussions between all the parts involved. Initially, an onsite building survey was carried out with the building owner, architect (Dr. Arch. Stefan Taschler - archilab) and a representative of the heritage authority. A dialogue around the preliminary design was organized between the architect and heritage authority a couple of months later. Finally, a second meeting between the architect and heritage office was held eight months after the survey to discuss the intervention. The open dialogue and the mutual support between building owner, architect and heritage office ensured the quality of the retrofit, promoted the valorisation of the heritage and reassured the building owner that the design was going to be in coherence with local construction regulations and high standards of quality and comfort in the building.
Heritage Assessment Files
Building description in Monumentbrowser (heritage authority9
EURAC_Rainhof_tecnical report in german.pdf

Conditions of the envelope
Overall, the building was in a good condition. The original ground floor, built with natural stone, as well as the wooden construction of the first and top floor were well maintained. Only the masonry wall on the northeast corner was damaged due to a salt contamination from the adjacent septic tank. The lime plaster and floorboards of the balconies were partially damaged.
Description of pre-intervention building services
Originally, only two rooms in the entire building were equipped with heating systems: the kitchen and the "Stube", both on the ground floor. The "Stube", the typical wood panelled parlour of South Tyrolean farmhouses, was equipped with a masonry wood burning stove, while the kitchen was heated with a smaller wood burning stove.

Renovation + Extension
The Rainhof was to be restored, renovated and extended with one apartment on the ground floor and two holiday apartments on each of the floors above. The aim of the project was to preserve the overall appearance of the listed building but to enable contemporary living and working. The owner and architect were convinced from the beginning that a general renovation of the building should also include an increase in energy efficiency and comfort of the building. All characteristic, valuable and traditional architectonical elements were to be maintained and restored in consultation with the heritage authority. The appearance of the main elevations (southeast and southwest) and the wooden shingle roof remained largely unaltered (Figure 4). The ground floor and first floor of the exterior facade were restored in agreement with the heritage office. For instance, the external plasters were repaired with lime plaster and ornaments around windows were kept. The balcony floorboards were replaced but the railings were kept whenever possible and only small replacements were done. The windows were replaced with new tailor-made wooden windows with the same proportions, filigree frames and sash bars found in the original historic windows. The copper-blue colour of the windows on ground floor was maintained, the window upstairs were made in natural cedar. Only additional rooms such as the storeroom on the north side, the outhouse and the canopy on the east side were demolished.
Was there any change of use?
The building had always been used as an agricultural-residential building, however the main living area had not been used for several years since the family owning the farm had moved into a newly built house in the vicinity. After the renovation, the aim was using the building for residential purposes only, both private and rental, and occupying all three floors. This obviously meant a significant change in the use of the building. The contemporary use with five apartments instead of one residential unit resulted in the top floor being occupied, an extension built to the back of the property and the installation of several kitchens and bathrooms.
Stakeholders Involvement
Architect
Dr. Arch. Stefan Taschler - archilab
Paul von Sternbach Straße 9; 39031 Bruneck
taschler@archilab.com
Tel.0039 0474 530672

A large part of the stone masonry wall in the ground floor (except in the "Stube" and "Labe") was insulated internally with a thin layer (4-6 cm) of insulating plaster (Calcetherm λ=0,068W/mK). The U-value was improved from 2,39 W/m2K to 0,87 W/m2K (based on standard values of the energy calculation tool).

This insulating plaster is lime-based and, unlike an insulating panel, it is applied in a thin layer that can follow the uneven surface of the original wall surface ensuring a similar appearance to the original plaster.

The external wall around the “Stube” was insulated with 8 cm of wood fibreboard placed in the space between the masonry and the wooden cladding.

Using the space behind the wooden cladding, the original wooden panelling and of the proportions of the room were not altered.

Due to the salt contamination of the northeast corner of the building, it was necessary the demolition of part of the existing wall. A new wall was built with perforated thermal bricks (lambda 0,11 W/(mK)).

Here the appearance from outside is similar to the original wall. Most parts of this wall are also below ground and thus not visible from outside.

The existing “Blockbau” (solid wood) construction, consisting of horizontal rectangular hewn beams and wooden paneling was insulated from the inside with 12 cm of wood fiber board. In addition to the thermal resistance improvement (from 0,64 W/m2K to 0,24 W/m2K) the addition of a windproof layer between the old structure and insulation panel improved significantly the air tightness of the whole construction. The insulation layer is covered from the inside with a vapor barrier and a service gap that allows the installation of ducting and wires while protecting the integrity of the construction.

In those parts of the existing “Blockbau” (solid wood) construction, where there was no internal wooden paneling the wood construction was as well insulated from the inside with 12 cm of wood fiber board (cf. Wall "First floor - existing "Blockbau" construction (with wooden cladding)") . Also here, in addition to the thermal resistance improvement (from 0,76 W/m2K to 0,24 W/m2K) the addition of a windproof layer between the old structure and insulation panel improved significantly the air tightness of the whole construction. The insulation layer is covered from the inside with a vapor barrier and a service gap that allows the installation of ducting and wires while protecting the integrity of the construction.

A new wooden cladding similar to the original surface was installed as internal finish of the wall. Thus, the original wooden construction was kept with minor modifications to the internal appearance of the rooms.

All existing windows were exchanged with new units made ad-hoc by a local furniture maker. The aim was building a two-sash window with two glazing bars each that on the one hand achieved high levels energy performance and on the other hand were of high aesthetic quality.

Insulation of the former "cold" pitched roof. The insulation was applied internally to maintain the existing wood shingle roof.

To improve the supply of daylight in the two holiday apartments in the attic, two glass bands were installed in consultation with the heritage office.

A new heating system works as a combination of a biogas boiler and wood-chip boiler (2). Almost all rooms are heated through a floor heating system.

The traditional stove is kept in the “Stube” although it is not heated with firewood anymore, instead it is connected to the central boiler. In the rooms where the old wood floorboards were restored, no floor heating was used, but single radiators.

The domestic hot water system is paired with the heating system.

As described above, space heating and domestic hot water is provided by two different boilers, both running with renewable energy. The biomass boiler uses wood chip produced directly from the farm woodland and stored in the silo next to the building. The gas boiler runs with the biogas produced from the manure of the cattle reared in the farm in a biogas plant built between the stable and residential building. The energy produced from biogas and wood chips cover the energy need of the Rainhof, a nearby house (included holiday apartments) and the stable.

Energy Performance
Energy performance certificate: As the building is listed, there is no legal obligation to certify the building. Nevertheless, a calculation according to the local energy agency (KlimaHaus) was done.
Voluntary certificates: No
Energy Use
Documents:
EURAC_Rainhof_Energy calculation CasaClima.pdf
Consumption_estimation_After: 60 kWh/m2.y

Primary Energy
Consumption_estimation_Calculation_method: The energy produced from biogas and wood chips cover the energy need of the Rainhof, a nearby house (included holiday apartments) and the stable.

The impact of the intervention on the indoor climate was evaluated by means of a post-occupancy evaluation, including the opinions of the building owner (and occupier of the main dwelling unit) and a number of guests. The overall impression on the comfort was positive. Guests opinions on the thermal comfort was very positive. They appreciated the control of two independent circuits of the heating system in the apartment (kitchen, living room, and bedroom and separately the bathroom).

Building owner and guests evaluate the daylight supply as sufficient, despite the reduced dimensions of traditional window openings, even in winter.

Building owner and guests evaluate the overall living comfort as positive. The appartments towarts the courtyard have better conditions, as they are turned away from the street