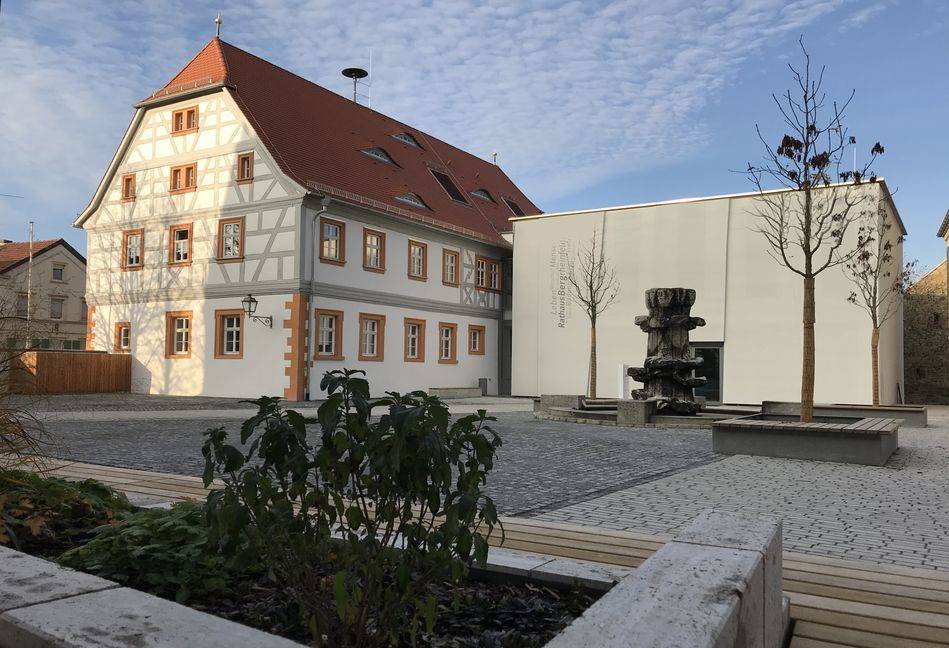 The listed town hall in Bergrheinfeld was built in 1660 and has been converted and renovated again and again over the past centuries. The most recent restoration of the cultural heritage included, in addition to the existing old building, the construction of a modern, barrier-free extension building with a textile facade and together they form the new and modern center of the community.
GENERAL INFORMATION RENOVATION PROCESS RETROFIT SOLUTIONS EVALUATION
Energy performance
54,88 kWh/m2.y

In 1666/67, the Juliusspital Würzburg erected the building complex intended as a bailiwick, including the adjacent tithe house, barn and courtyard. In 1863, this passed into the possession of the Bergrheinfeld municipality for 16,000 gulden and was used as a town hall, schoolhouse, but also to house teachers' apartments. In 1968, the building, which from then on was used exclusively as the town hall, underwent extensive renovation. However, the increased demands on the building services as well as on the administration, which was occupied with additional offices, forced the municipality to carry out a general renovation of the old town hall and to extend the building with a new building. Through these construction measures, which were completed in the summer of 2018, the municipality of Bergrheinfeld was also able to set a milestone for a successful but also sustainable inner development of the town center and continue to preserve its cultural heritage.
Urban context
The town hall is located at the main connection road of the grown street village Bergrheinfeld in the middle of the historical village center, which is the center of the community. Together with the adjoining community library and the elementary school, a pleasant four-sided courtyard with a public inner courtyard is being created, from which the town hall will be accessible both before and after the renovation.

ELEMENTS WORTHY OF PRESERVATION
Among the components worth preserving were the historic stucco ceilings, Window frames, the room doors, the roof truss of the crippled hipped roof with bat dormers and furthermore the externally visible half-timbered construction on the upper floor of the former bailiff's building.
Heritage Value Assesment
The Bergrheinfeld town hall is listed as an architectural monument in the bavarian monument list due to its historical value. In addition to the former bailiwick building or respectively the current town hall, the adjacent former tithe barn, or more precisely today's municipal library, is also listed as an architectural monument. The entire building structure from the roof to the foundations was under monument protection before the renovation.

Conditions of the envelope
At the time of the renovation, the 352 year old building was clearly worn out, although the typical mixed construction of massive and wooden components was still present. Especially the ceilings were dilapidated, floors had a difference in height of up to 16cm and almost every wall or ceiling was characterized by different structural elements. There was also major damage to the roof structure due to moisture penetrating the eaves. Damage could also be found on the outside of the half-timbered gable on the west side and on the inside of the framework.
Description of pre-intervention building services
The entire existing technical building equipment, which includes heating, plumbing, air conditioning and electrical engineering as well as the ventilation system in the adjacent library, was checked for its condition. Due to the unsatisfactory condition, all pipes had to be completely relaid and the ventilation system had to be replaced in a different position.

Renovation + Extension
The aim of the renovation and extension of Bergrheinfeld town hall was primarily to combine and design the historic old building and the modern new building in such a way that both parts of the building are connected with each other, but at the same time their independence in terms of the age of the buildings remains apparent. There should be no fusion of the architectural styles, but rather a successful balancing act. Furthermore, the character of the former bailiwick building was to be preserved despite the general renovation of the historic substance. It was important for the renovation to be carried out in accordance with the provisions of the BLfD with contemporary workplace conditions, including the requirements from the building services (heating, indoor air / drinking water hygiene).
Was the intervention planned following a step-by-step approach?
First, the excavation for the new building was carried out on the east side and then the HDI process was carried out under the old building in the area of ​​the new building. The renovation of the old building was carried out at the same time as the new building.
Lessons learned
One of the difficulties that arose during the renovation process is the difficult handling of historical building materials and the associated requirements for monument protection, statics, fire protection and building physics. In particular, this difficulty often occurred during work for slots, breakthroughs through ceilings and walls.
Stakeholders Involvement
Architect
Architektur + Ingenieurbüro Perleth
Kornmarkt 17, 97421 Schweinfurt
info@architekt-perleth.de
Tel.09721 675191-00

Tools used
Was the renovation process done following a specific methodology? - According to DIN 18599 - Software Hottgenroth

The exposed wooden structure including the clay building materials processed in between were preserved. Only a thermal insulation plaster was applied from the inside and the interior facade was re-plastered.

The solid brick masonry was preserved. Only a thermal insulation plaster was applied from the inside and the interior facade was replastered.

In order to be able to guarantee a new continuous thermal envelope, the energy renovation was also carried out on the inside of the wall structure on the first floor.

The large-format glazed windows from the 1968 renovation were removed and replaced with new windows based on the historic model. A modern tilt and turn fitting was deliberately omitted in order to keep the cross-sectional areas of the profiles as small as possible according to the historical model. When selecting the wood, the decision was made in favor of durable eucalyptus from an FSC plantation in Spain. Eucalyptus wood is also cheaper than local oak or larch, so the decision was also made for monetary reasons.

The windows from 1968 had no relation to the historic model and were therefore not worth preserving in terms of historic preservation.

The roof truss of the cripple hipped roof was preserved and only re-roofed with red plain tiles. However, the roof cladding does not serve as a thermal envelope, but this function is assumed by the ceiling to the attic (compare build-up).

In the uninsulated attic of the town hall, the new ventilation system with heat recovery was installed as part of the renovation.

The floor slab between the heated first floor and the cold basement vault was also thermally upgraded, even though it only has a partial basement. The existing concrete ceiling was extended in the area of the former basement access. In addition, the structure, which is to serve as a thermal envelope, received a new floor structure including new insulation level.

The floor slab continues to fulfill its load-bearing function in the course of the refurbishment, which is why it only needs to be upgraded in terms of today's energy requirements.

A pellet heating system was installed for the base load and a gas condensing boiler system for additional demand. In the future, this central system, which was placed in the elementary school, will supply the town hall including the annex, the elementary school and the library. The heating can be controlled via the room thermostats.

The former central ventilation system in the library was repositioned and replaced in the course of the renovation in the attic of the town hall. The new system is a central ventilation system with controlled supply / exhaust air, which is CO2 and humidity controlled and supports heat recovery. It takes care of the town hall as well as the school and the library.

A refrigeration device was also installed in the attic. 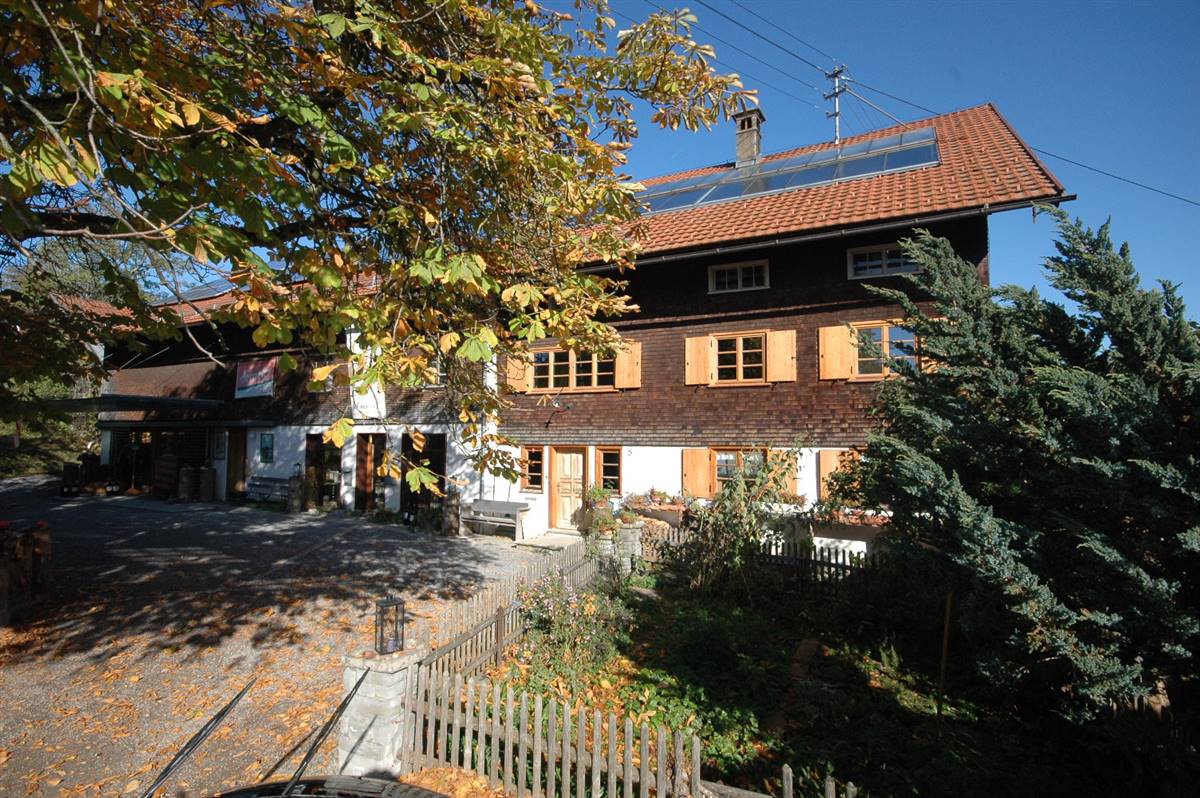 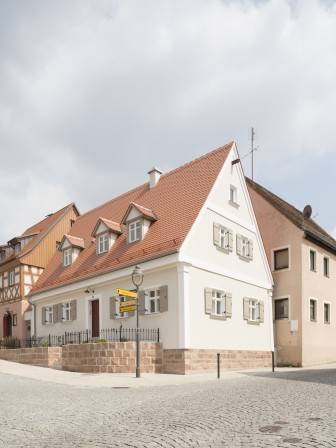 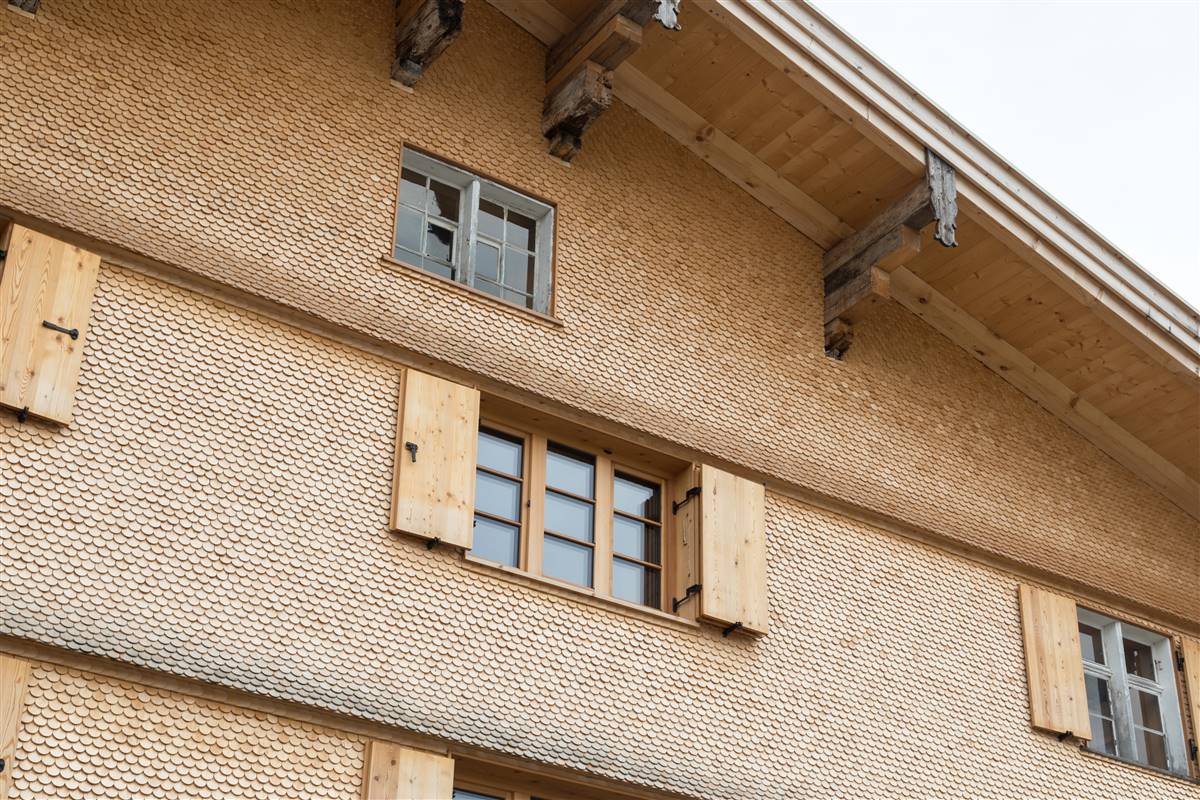