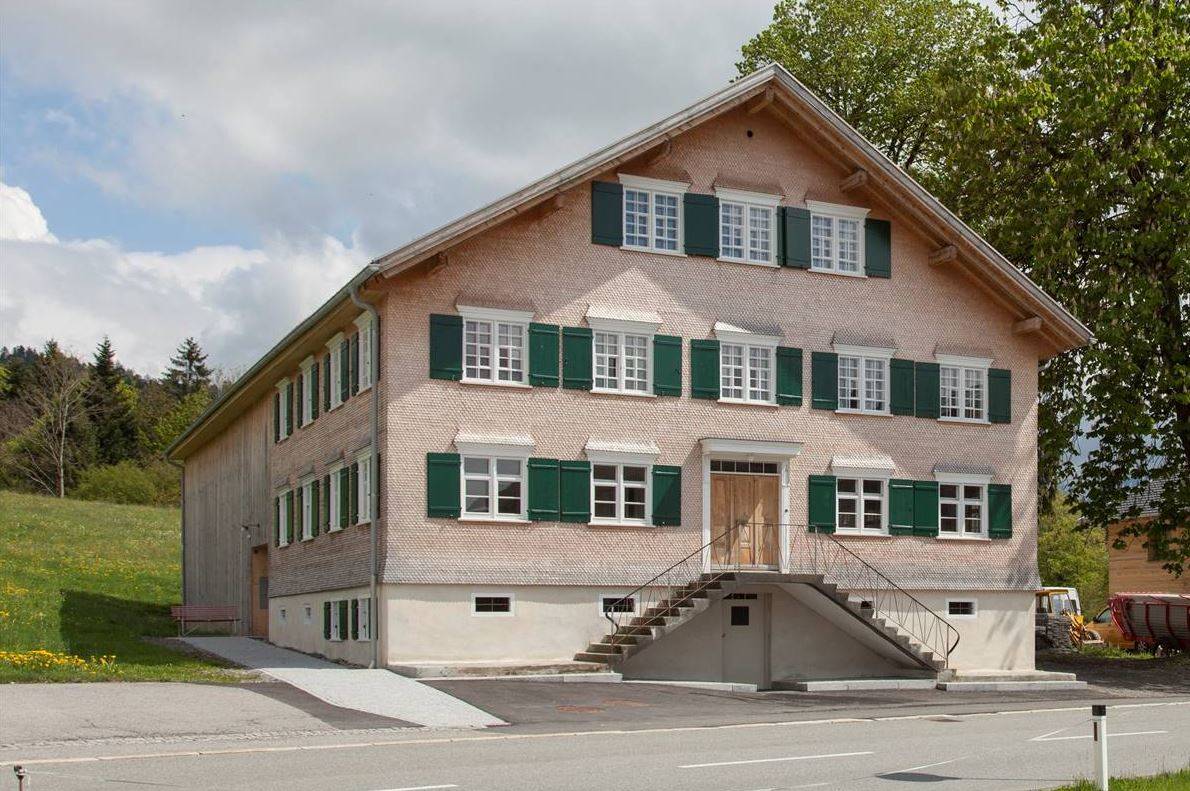 The approximately 250-year-old Gasthaus Adler in Langenegg was listed as a historical monument in 2002. The building was vacant for many years before it was purchased by a committed and technically talented neighbour. The new owner of the house renovated it mainly on his own. The brother of the owner, a well-known architect from Bregenz, developed an architectural concept based on which four residential units could be accommodated in the building. Due to the careful handling of the historically valuable elements, both on the inside and on the outside, the historical flair and the generosity of the traditional guesthouse could be retained.
GENERAL INFORMATION RENOVATION PROCESS RETROFIT SOLUTIONS EVALUATION
Energy performance
46 kWh/m2.y

The Gasthof Adler was built around 1770. It is a broad, two-storey Einhofs with residential and inn use in the west and an economic wing on the east side. Based on a high, bricked cellar floor, the house was built in block construction. The untreated wood cladding and the white lattice windows with green shutters are characteristic elements of Langenegg and the Bregenzerwald. Another characteristic feature is the service wing with a high entrance to the upper floor in a column construction. The three-part, late-classicist entrance portal is elevated and accessed via a double flight of stairs. In order to meet today's demands of living comfort, the exterior walls were provided with thin, diffusion-open insulation layers. The façade was newly shingled and the old box-type windows were renovated and, if necessary, partly renewed or supplemented according to the original windows. However, the good energy demand of the building is primarily a result of to the new insulation of the basement ceiling and the roof. On the inside, the building has a central corridor layout, meaning that the guestrooms and residential units are accessible from the corridor in the middle of the house. This structure was also retained after the renovation in 2013. Sanitary and ancillary rooms were accommodated in rooms with plain or no furnishings, so that as many of the historical details as possible were preserved, such as internal ogival windows, field panelling, doors with fittings and box locks from the Baroque and Biedermeier periods, as well as fitted cupboards, tiled stoves or the house bell. A new staircase was installed in the economic section. Lighting is provided through glazing at the entrance door and also through small gaps between the wooden façade, that are barely visible from the outside. The attic was partially extended during the renovation. For daylight three new roof windows on each side are installed.
Urban context
The former Gasthof Adler is located in the immediate neighborhood of two other listed buildings, the late baroque parish church of Langenegg, built in 1775, and the former Gasthof Engel. Together with the Gasthof Dreikönig, these historic buildings form the centre of the district "Kirchdorf".

ELEMENTS WORTHY OF PRESERVATION
According to the notice of the Bundesdenkmalamt from the year 2002 "Haus Kirchdorf 7 is a well-preserved example of a Biedermeier-style inn and farmhouse in the Vorderen Bregenzerwald, where the influence of the Allgäu house type (middle-floor layout, high entrance in the upper floor, white-painted windows, green shutters) is clearly visible."
Heritage Value Assesment
In 2002, the building was classified as a historical monument, as " The former inn, which is part of the old village centre of Oberlangenegg, is a rare document of the historical rural life of the Bregenzerwald, which is why it is of particular cultural and folkloristic interest."

Conditions of the envelope
The basic structure of the house (round shingles, block walls, ceilings made of stretched planks, panelling, etc.) were, exept the basement ceiling, in good condition. They were provided with additional insulation mainly for thermal reasons, and consequently with a new façade, too. The box-type windows are in good condition and were repaired, supplemented or replaced where necessary in the course of the renovation.
Description of pre-intervention building services
Decentralized heating with individual stoves. One tiled stove in each of the parlors.

Renovation
The aim of the refurbishment was to preserve the original building fabric and its interior and exterior decoration, such as windows, doors or floor coverings, while at the same time meeting today's comfort requirements in terms of sound insulation, thermal insulation, etc. Through the innovative conversion of the previously empty inn, four residential units could be created.
Was there any change of use?
The house was originally used as an inn with an attached agricultural farm. Before the renovation, various possible uses of the building were discussed for a long time. Today's use of the house was a good alternative to an inn, as it takes into account the original floor plan and special features of the house. The former inn and living rooms for the owners were divided into four residential units and are nowadays rented out. The economic part serves as a warehouse today.
Lessons learned
Due to the long planning and construction period and the craftsman's talents of the owner, about 80 percent of the renovation work could be carried out by the owner himself: "This has the advantage that one thing leads to another and you can watch the work grow."
Stakeholders Involvement
Architect
DI Josef Fink
Bahnhofstraße 7/1, A-6900 Bregenz

The existing exterior wall made of wood cord was provided with a combination of interior and exterior insulation during the refurbishment. Behind a wall paneling made of silver fir is the 5 cm thick interior insulation, which is also used as an installation level. The vapor retarder was intentionally designed behind it, allowing for a penetration-free vapor retarder layer. A 6 cm thick exterior insulation as well as the wind paper was applied on top of the existing 150-180 mm thick wood cord. The vapor retarder on the inside and the wind paper on the outside protect the wooden structure from moisture damage. The existing facade was completely removed and replaced with new two-layer shingles made of spruce wood.

The outer appearance of the historic building was preserved by placing the outer insulation level behind the shingle façade .

The box-type windows are fitted with architrave style lentel. The windows on the ground floor are six-part with transoms from the early 20th century.

The wooden windows were renovated and partly renewed or supplemented in the original way.

The box-type windows are fitted with architrave roofs. The eight-part transoms and built-in ventilation slides are typical for the Bregenzerwald of the 19th century.

During the renovation, the wooden windows were renovated and partly renewed or supplemented in the same way.

The original crippled hipped roof was reconstructed in the second half of the 20th century into a ridge purlin roof and covered with Eternit. In the course of the renovation in 2011, the roof was provided with 32 cm of insulation and a new tile covering.

Except of three new roof windows on each side, a new roof covering and the installation of a solar plant, the roof remained mainly unchanged from the outside.

Many parts of the wooden beam ceiling between the basement and the ground floor had to be renewed. The existing beams were statically reinforced and provided with 16 cm of insulation.

The old floor coverings were removed, cleaned and reinstalled. In the course of this, an underfloor heating was installed.

In order to get rid of the moisture problem, resulting from a lack of waterproofing of the basement walls and the foundation in the basement, a surrounding drainage system had to be built.

In the course of the renovation, a pellet central heating system with underfloor heating and a solar system were installed. The two tiled stoves in the former restaurant rooms were also repaired. The elaborate yellow stove with blue-green decoration is by the way a production of the well-known bregenzerwald Hafner family Geser.

Originally, the building was heated exclusively by the two tiled stoves in the inn's dining rooms. For a modern and comfortable use of the building, the installion of a heating system was therefore required.

Hot water is provided by the pellet central heating system and the solar thermal system.

In the course of the renovation, a solar thermal system was installed on the south-facing roof to provide hot water.

In the course of the renovation, a pellet central heating system with underfloor heating was installed. The two tiled stoves in the former guest rooms were also repaired. Incidentally, the ornate yellow stove with blue-green decoration is a production of the well-known Geser family of stove makers from the Bregenzerwald.