The potential that lies dormant in vacant properties and which must be exploited is shown by the "Öeconomicgebäude" in Dornbirn, which has been brought back to life. Contemporary living and working are being introduced into the sensitively adapted urban barn, which is a listed building. For Julia Kick, who acted in this project in the dual role of architect and builder, the "Oeconomiegebäude" was a stroke of luck, because in her work she has been dealing intensively with the topic of vacancy for several years. The adapted building is a successful example of a sensible adaptation of listed buildings to protect them from vacancy.
GENERAL INFORMATION RENOVATION PROCESS RETROFIT SOLUTIONS EVALUATION
Energy performance
71,02 kWh/m2.y

Building use Residential building with atelier

The economic building, as an addition to the hotel and the Josef Weiss winery, was built in 1889 in the Dornbirn station quarter and was listed as a historical monument in 1997. The wine cellar right next door to it was already renovated in 2001. There were several planned renovation projects for the Stadel, but none of them was realised and the building stood empty for decades. Finally, in 2016, the owners acquired the property and adapted it to their apartment with architecture studio. They responded to the conditions of the building by retaining the structure of the stable, barn and shed. The result was a loft-like living and working environment with split levels, air spaces, open-plan spaces and intimate Attic space. The outer appearance was to be preserved due to the protection of historic monuments. In order for the barn to be habitable at all, however, it had to be insulated. This involved a lot of detail work. The special feature was that for the original use as a farm building the facade showed an unusually high number of details and decorations that had to be preserved. The assumption was that the South Tyrolean origin and the wealth of the builder Josef Weiß was the reason for this. Removing the wooden façade on the upper floors in order to be able to make a wall construction that is correctly ventilated according to today's standards would most likely have damaged many of these decorations. A renewal and reconstruction was to be avoided, on the one hand for reasons of cost, on the other hand because the patina of the façade was part of the appearance and above all was visually pleasing. Thus it was possible to put an inner-city wasteland to a new use and still allow the special building to continue telling its story.
Urban context
The Josef Weiss ecology building was build at the end of the 19th century opposite the railway station in Dornbirn and is still a central building in the vivid station quarter.

ELEMENTS WORTHY OF PRESERVATION
The elaborate, lively design of the building and the dominance of wood as a material correspond to the national romantic tendencies in architecture towards the end of the 19th century. In Dornbirn, these buildings, which set a special accent within the neighbouring building landscape with their claim to a representative architectural vocabulary that is equally binding for residential and commercial buildings, are already rare as a characteristic example of architecture of the late phase of historicism and therefore have a special status. The former Weiss Winery in Dornbirn, together with its farm building, should therefore be regarded as a monument of artistic and cultural significance.
Heritage Value Assesment
The adjoining farm building was built in 1889, as was the main building, according to plans by Josef Anton Albrich from Dornbirn. The ground floor is built in brick masonry, the upper floor in timber construction. Particularly noteworthy are the ornately sawn purlin supports and the carved window frames.

Conditions of the envelope
The farm building was listed as a historical monument in 1997. Especially because the façade had an unusually high number of details and decorations that had to be preserved. Thus, the wall structures were renovated on the inside, allowing the the exterior appearance to be preserved.
Description of pre-intervention building services
The existing building was used as a stable, barn and shed and was therefore not equipped with any building services. Neither water nor heating was available in the building at that time.

Renovation
The aim of the renovation was to use the potential of an empty, listed building and to sensitively adapt the building into an urban barn in which contemporary living and working is possible. During the adaptation, a respectful treatment of the existing building was the main focus. The external appearance of the building had to be preserved.
Was there any change of use?
The owners have adapted the property to an apartment with a studio, but the building has been adapted to the conditions of the listed building stock. The structure of the stable, barn and shed was retained.
Stakeholders Involvement
Architect
DI ZT Julia Kick
Franz-Michael-Felderstraße 5a, 6850 Dornbirn
julia@juliakick.com
Tel.www.juliakick.com

Tools used
Was the renovation process done following a specific methodology? Insulated wall construction from the inside to the outside, so that the listed façade was preserved.
Energy calculation OIB
Hygrothermal assessment No
Life Cycle Analysis (LCA) No
Other No
Supplement Vorarlberger Nachrichten, November 2017

In order not to change the exterior appearance of the listed wooden facade on the upper floor, the client decided to use an insulated wall construction on the inside. Nevertheless, the original load-bearing structure is still largely visible on the inside.

During the adaptation, the focus was on a respectful treatment of the existing building stock. The external appearance of the building had to be retained and the patina of the wooden facade screen could be left as desired.

The original shape of the window openings has been retained in order not to change the character of the building. The windows specially made for this purpose comply with the energy standard for the renovation year 2016. In order to bring more light into the living space on the upper floor, a small loggia has been placed in front of the east-facing living space, which is "hidden" between the outer facade and the glass front that is offset inwards.

In the old stock there were no classical windows with glazing but only window openings, which had a cross lathing as weather protection. All window openings were retained during the renovation. Only windows made of untreated spruce wood were installed.

In order to also be able to use the attic as living space, the roof truss was insulated as a ventilated pitched roof.

The renovation was carried out with the utmost care and meticulousness. The damaged areas were removed and replaced with "prostheses". "We did not attempt to match colors or retouch. Completed wooden parts honestly remain visible as new," explains Julia Kick.

In the entire area of the former barn, shed and horse stable, the floor was insulated against the ground.

The appearance of the building had to be preserved due to the protection of historical monuments. Thus the division of the rooms on the ground floor was left as it was, but put to a new use.

The existing building was used as stable and shed, so there was no heating system.

To make the building habitable at all, it was necessary to install a heating system. For reasons of monument protection, neither solar nor PV was allowed to be installed on the building. For these reasons the owners decided to install a comfort ventilation system with heat recovery and an additional gas boiler.

Due to the use of the Berstandsgebäude as a stable and shed, there were no heating or ventilation systems and thus no system components worth preserving.

The existing building had no hot water preparation.

In order to be able to use the building as a residential building, it was necessary to install a hot water system.

Measured Parameters
Internal Climate
Type_of_monitoring: Punctual
Description: The residents find the climate in the apartment and in the studio pleasant.

The residents have an average and common room temperature in the building.

The wooden panelling of the interior rooms provides the building with an acoustic balance. 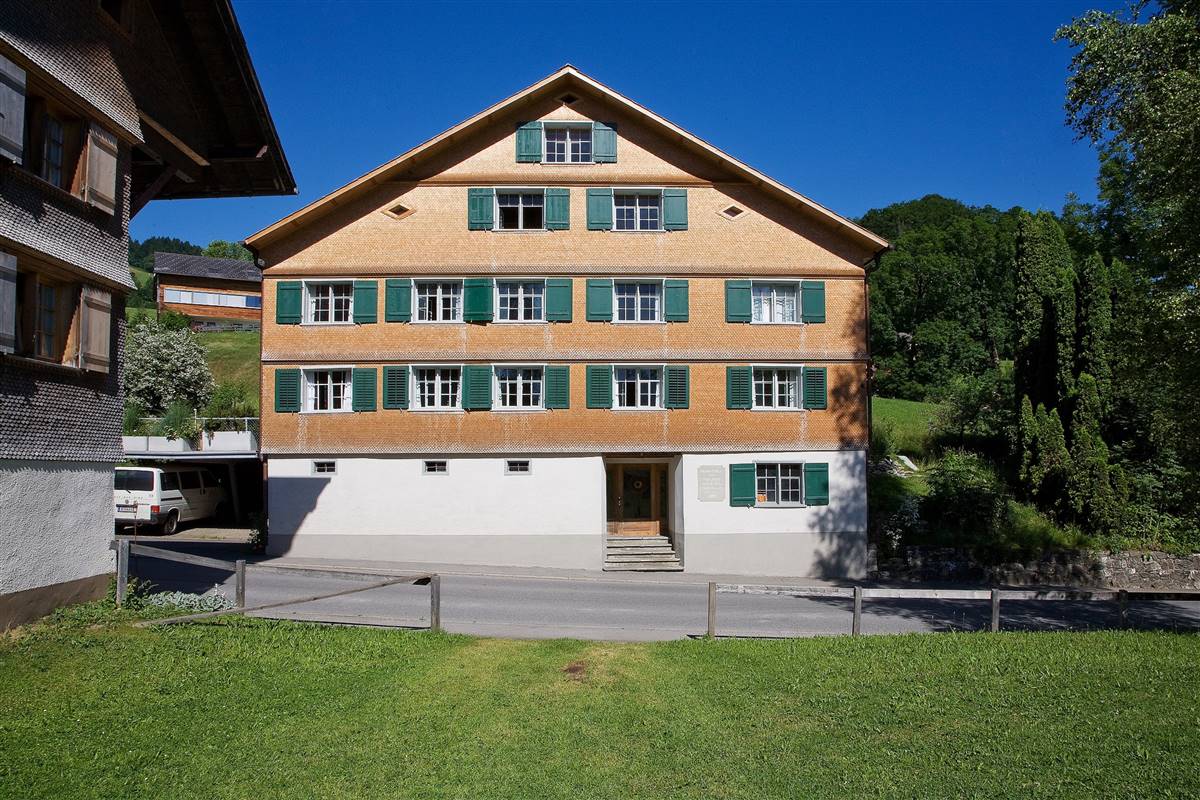 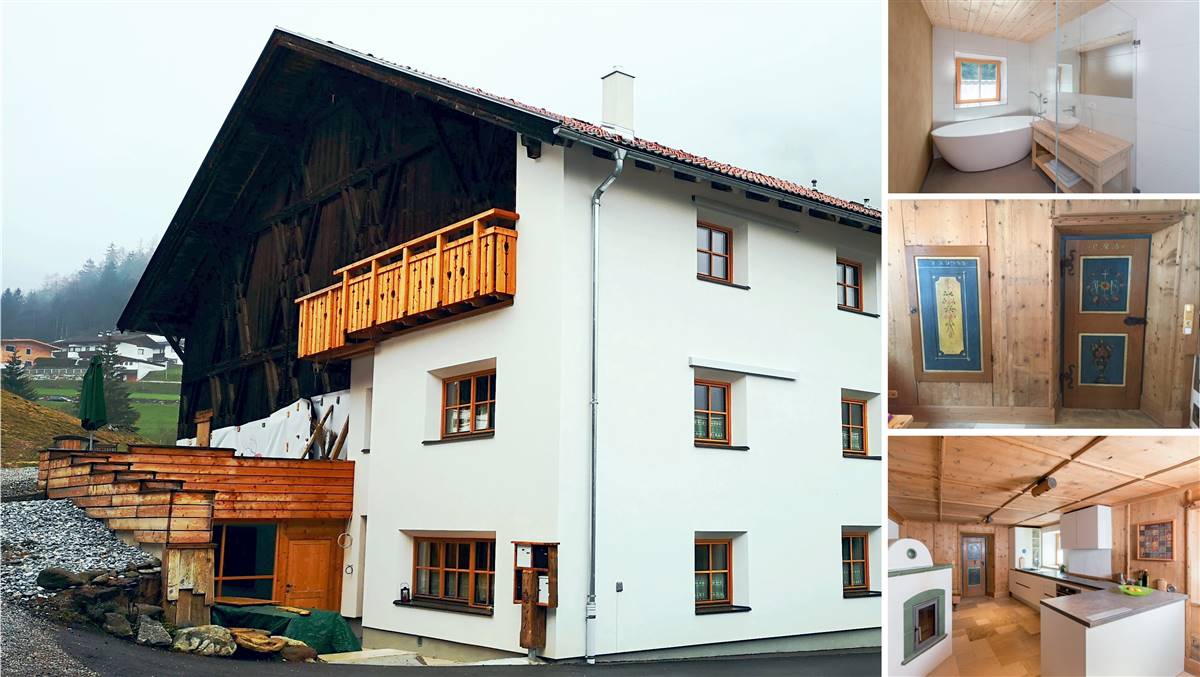